In today's Rewarding Moments In Redskins History presented by Maryland Lottery My Lottery Rewards, we look back at DeAngelo Hall's four-interception game in Chicago.*

Maybe it was because his family was in the stadium, or maybe because Bears quarterback Jay Cutler just enjoyed throwing his way. Whatever the case, cornerback DeAngelo Hall had a career game in Chicago, one of the greatest in NFL history.

Seven years ago, on Oct. 24 at Soldier Field, Hall put on a show at cornerback, intercepting four passes in the second half, tying a league-high mark, and returning one of them 92 yards for a score en route to a Redskins 17-14 victory.

Hall could barely realize what he accomplished after the game.

](https://rewards.mdlottery.com/)"It's kind of mind blowing," he said. "I had my mom, my aunt, and my two cousins in the stands. The first ball went to my mom, the second ball went to my aunt and the next thing you knew everybody had a ball."

The highlight of the day, and the play that gave the Redskins a lead they would hold onto for good, came with Washington trailing 14-10 in the third quarter. The Bears were driving and reached the Redskins' 13-yard line.

Forced under pressure, Cutler made a throw off his back foot to the right sideline where Hall jumped in front of Johnny Knox to make a spectacular one-handed catch. But he wasn't done, sprinting down the sideline into the end zone.

London Fletcher called it the "sickest" interception he had ever seen.

Hall's three other interceptions were also impressive. His first one was a diving stab in front of Devin Hester. His third came deep in Bears territory, where he nabbed an off-target pass. The fourth and final pick came with just more than two minutes left in the game, when Hall leaped for a deep ball that was overthrown.

"There's no reason to shy away from him," Cutler said afterward, saving face. "I mean that's hard for me to say throwing four picks to the guy, but I still think if we had to play him tomorrow, I'd go after him every time."

I'm sure Hall would have relished the opportunity. 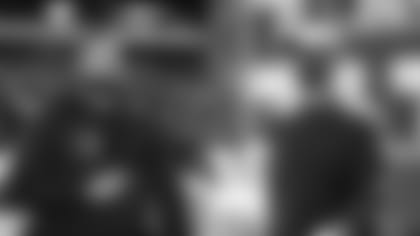 Wharton, Washington assistant offensive line coach, will get the chance to call plays after working under head coach Ron Rivera since 2018. Jacobs will serve as the special teams coordinator for the West team.

Ron Rivera has said the third offseason of his tenure as Washington's head coach will be a critical one, and there are several questions the team needs to answer.

A morning roundup of what the local and national media have to say about the Washington Football Team on Thursday, Jan. 20, 2022, presented by Death Wish Coffee.

The biggest lesson Jaret Patterson learned during his rookie season

The NFL is full of lessons for rookies, but for Patterson, always staying ready for every opportunity proved to be the most valuable.